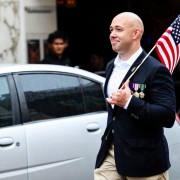 Brian J. Mast: A Man of Conviction Who Stands for his Country

Brian Mast, a modern day hero, and role model “American”, joins the Gold Coast Tiger Bay Club for the March 11 luncheon meeting.  Having served in Afghanistan and losing both legs, Brian sets out and achieves goals that make him proud to be him, and Americans so very proud of him. “An amazing Man.”

Brian Mast is a leader in both word and action. For over 12 years Mast served as a soldier in the U.S. Army resulting in the sacrifice of both legs and more while conducting operations in Afghanistan. He has been awarded numerous medals for Valor, Merit, and Sacrifice, to include The Bronze Star Medal, The Army Commendation Medal for Valor, The Purple Heart Medal, and The Defense Meritorious Service Medal.

Even while recovering at Walter Reed Army Medical Center in Washington D.C. after this catastrophic injury Mast found the strength to continue his fight to keep America’s enemies at bay. In addition to his physical therapy and continued service to the U.S. Army Mast simultaneously provided his expertise and experience to the National Nuclear Security Administration (NNSA), the Bureau of Alcohol Tobacco & Firearms (ATF), and the Department of Homeland Security (DHS).

Following retirement from the U.S. Army’s Joint Special Operations Command (JSOC) Mast returned to the place where he has had a lifelong connection and the only place he wanted to call home, South Florida. But retirement only lasted a day because he immediately continued his life’s work of special operations bomb technician now as an explosive specialist under the Department of Homeland Security (DHS).  In addition Mast has found time to travel between South Florida and Boston to complete a degree at Harvard University.

When Mast is not engaged in academics or explosives he bides his time within the most worthy causes he can find. Mast is a regular volunteer with numerous national and local veteran non-profit organization as well as programs to support physically challenged youth. Recently Mast donned an army uniform again when, in a show of support for the nation of Israel and the freedom it represents, Mast became a volunteer with the Israeli Defensive Forces (IDF). “For me, showing support for what I believe in is not writing a post on Facebook. It is giving of my own sweat, my own blood, and my own tears in the most right and worthy causes I can find.”

Mast pledged his life in defense of the United States and will soon pledge that same grit and determination to making our communities in Broward and Palm Beach Counties the strongest they can be as a candidate for Congress. “Each friend that I lost in combat gave their last breath, their last thoughts, and the last beat of their heart because it was best for their brothers and sisters to their left and right and for the United States of America. That is how my heroes served and I pray I can honor their sacrifice each day with the life they have afforded me to live.”

Businesses can also sponsor a luncheon for $200 and receive recognition on the website, in emails and five minutes on the program. The cost also includes one paid lunch.

Costs to attend are $35 for members paid in advance or $40 at the door and $35 for first time guests or $50 second time guests.

See www.goldcoasttigerbayclub.com for reservations or call 561.852.0000.