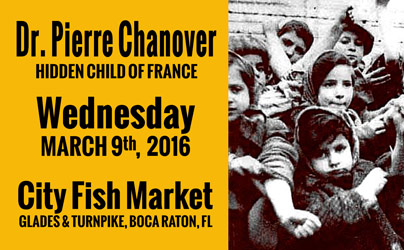 At age 10 Pierre was forced into a concentration camp and became one of the hidden children of France.
South Florida’s Dr. Pierre Chanover is a professor at FAU. He is one of an estimated 20,000 Holocaust survivors who have settled in South Florida’s three counties. He was just 8 years old when the war began in his hometown of Paris, France. At age 10 he was sent to a camp in southern France for Jewish prisoners. His story is on file at Yad Vashem.

“In comparison to other hidden children in death camps, my experience was not exactly the same,” explains the humble professor. “Mistreatment ? yes, but not gas chambers or crematoriums like others faced. He adds, “I was beaten, but not as badly as those in the death camps.”

Chanover eventually escaped to freedom and was hidden with various families. “Some good, some bad,” he says.

Chanover did not have siblings and says that all of his relatives in Poland, whom he had never met, perished. “I lost 17 members of (my) family,” he states.

Pierre Chanover Dr. Chanover is a Parisian-born author, poet, lecturer and professor (currently at FAU). He is listed in the Directory of American Scholars, and is the recipient of the French Ministry of Education’s Chevalier Dans L’Ordere Des Palmes the Academiques. He is founder and president of the PBC Chapter of Hidden Children/Child Survivors of the Holocaust.