From Monarchy to Mullahs: The State of Terror

You are here: Home / Events / From Monarchy to Mullahs: The State of Terror

From Monarchy to Mullahs: The State of Terror 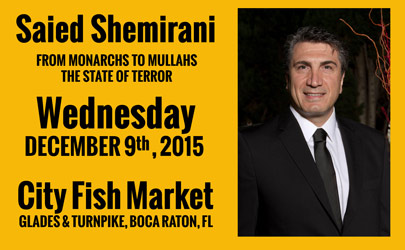 Meet and Listen to “Saied Shemirani”, News Show Host and political activist, who will explain the Islamic Republic Constitution and his goals of establishing a parliamentary system by overthrowing the Islamic Government in Iran.

Saied Shemirani was born into a middle class family in 1966 in Tehran. He was in middle school when Islamic radicals took power.

His dad was a champion in modern and traditional wrestling, and despite Saied’s great passion for the sport, he found his true love in Table Tennis. He won U18 Table Tennis National Championship in 1982 and 1983. He was ranked #1 in National Team and was to represent Iran in 1984 Asian Cup, but was disqualified for not observing Islamic law.

After his disqualification, he went to military service and spent two years in Iran-Iraq war theatre, witnessing the worst days of this eight year war. After his military service, he continued with sports until he was once again disqualified during National Table Tennis Championships for not observing Islamic and Sharia laws.

A few days after his disqualification, Saied left the country for Europe. He was in Europe for two years until he immigrated to Canada. He lived in Canada for 13 years working, studying music and Iran’s political history, in conjunction with having political talk shows in two of Toronto’s Iranian radio stations, which lasted five years.

In 2003, Saied moved to US, and started his TV programs. He continued his study of Iran’s political history, especially how and why power was transferred from Monarchy to Mullahs.

His direct contact with Iranians never stopped. In the last decade, he has been involved in several anti-regime movements. His human rights activism was instrumental in political asylum given to hundreds of Iranian refugees in Europe.

Today, his program in the only commercial free Iranian media has attracted millions of Iranians inside and outside of Iran. His research and analysis has made a great impact on people, exposing the true face of Islamic government by explaining Islamic Republic Constitution and its observance of Sharia Law since 1979.   His goal is the overthrow of Islamic government in Iran and establishing a parliamentary system based on human rights and secularism.

His website is http://www.iranbozorg.com where you can find an archive of what can be considered a small portion of his almost two decades of political activity.