Jeremy Ring – Florida Senator and Author: We Were Yahoo

You are here: Home / Events / Jeremy Ring – Florida Senator and Author: We Were Yahoo

Jeremy Ring – Florida Senator and Author: We Were Yahoo 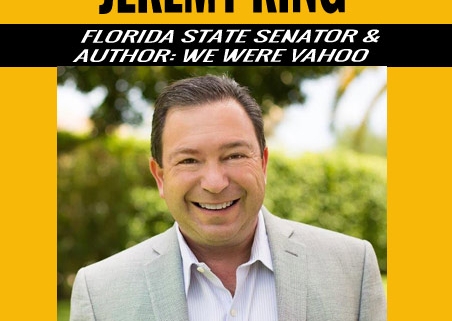 Jeremy Ring is appearing at City Fish Market in Boca Raton on August 8th, sponsored by Gold Coast Tiger Bay Club from 11:30am until 1pm. Lunch is included in the ticket price.  Tickets may be purchased here.

Jeremy Ring was raised in Massachusetts and upon graduating from high school he attended Syracuse University, where he received his degree from the Newhouse Communications School in 1992. Mr. Ring moved to New York City, and at the age of 25 was hired as the first outside sales executive for Yahoo.  He opened the New York office and first satellite office for Yahoo.  As the original sales executive hired by the company, he was instrumental in growing sales to over $1 billion in just five years.  Mr. Ring, having relocated to Silicon Valley launched and led the Programs Team, working with Global Fortune 500 businesses on their internet marketing strategies. In doing so, he was a pioneer in development and growth of the online advertising industry.

In the Florida Senate, Senator Ring has past served as the Vice Chairman of the Higher Education Appropriations Committee and the Higher Education Policy Committee.  From 2009 – 2016, Mr. Ring served as the Chairman of the Governmental Accountability and Oversight committee, which has legislative oversight of the Florida Pension Fund, the State Board of Administration and other government entities in the State of Florida.  Governor Charlie Crist, appointed him as the Chairman of the Statewide Committee of Bio-technology Competitiveness. Senator Ring has sponsored and passed several major bills designed to commercialize and secure capital for IP developed within the State University System.  Mr. Ring has created the Florida Institute of Commercialization, which acts as a business incubator to innovations developed at Florida’s State Universities, the Florida Technology Seed Capital Fund, for early stage investing, The Florida Opportunity Fund, which serves as the first round of institutional investment and the Florida Growth Fund, which provides later stage capital investment.

Senator Ring, first book, We Were Yahoo (Post Hill Press) was released in January 2018. The book tells the story of the rise and fall of Yahoo and how the fall led directly to the rise of Google and Facebook.