Kelly L Smallridge: A Vision of The Future Of Palm Beach County

You are here: Home / Events / Kelly L Smallridge: A Vision of The Future Of Palm Beach County

Kelly L Smallridge: A Vision of The Future Of Palm Beach County 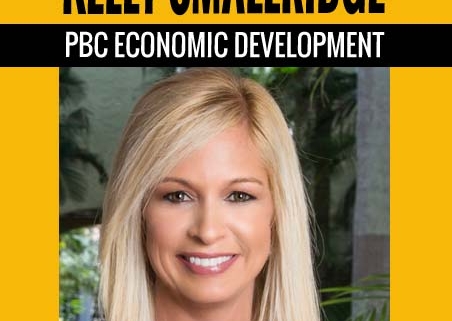 Kelly Smallridge will be speaking about A Vision of The Future of Palm Beach County on June 12th to the Gold Coast Tiger Bay Club at City Fish Market in Boca Raton. This luncheon event is open to the public and tickets can be purchased online here. Ticket purchase includes a lunch choice of one among several daily fresh special selections. Seating starts at 11:30am and runs until 1:00pm. Please join us.

Kelly oversees all operations of the Business Development Board which is one of only two Accredited Economic Development Boards in the State of Florida. In 2004, she became the first female President of a South Florida economic development board after serving in many different capacities within the organization including the lead role for the Recruitment, Retention and Expansion from 1988-2004.   In addition, she serves on the boards of the Treasure Coast Regional Planning Council, Career Source, South Florida Fair, the Homeless Coalition and The Education Foundation. She is a member of the International Women’s Forum, Enterprise Florida and International Economic Development Council.

In February 2013, she was featured on CNBC and in the NY Post touting the assets of Palm Beach County.  Under her leadership, the BDB has received numerous state and national awards for its work in recruiting and expanding companies to Palm Beach County and is credited with facilitating two of the world’s largest bioscience organizations to the state: The Scripps Research Institute from San Diego and the Max Planck Society from Germany.  Her aggressive style in facilitating relocations and expansions has led to big announcements of jobs for this county from companies like United Technologies, ADT, Pratt & Whitney, G4S, Fed Ex, Sikorsky Helicopters, Aldi, Cancer Treatment Centers of America and TBC Corporation to name a few.

Kelly is also credited with creating several new programs for Palm Beach County: the first Expedited Permitting Ordinance which was adopted by 15 cities in Palm Beach County; a countywide “Shovel Ready” program to identify sites ready for construction within 12 months as well as an Education Initiative which provides a one-stop resource for CEOs to find public, private, charter and faith-based schools when deciding to relocate.

Ms. Smallridge is a lifelong resident of Palm Beach County and she graduated from the University of Florida.  She has three sons and resides in Wellington.