The Rise and Fall and Rise of Mary McCarty

You are here: Home / Events / The Rise and Fall and Rise of Mary McCarty

The Rise and Fall and Rise of Mary McCarty 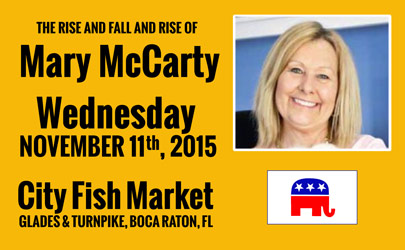 The rise, fall and rise of Mary McCarty:

Once a local powerful Republican leader she joins us to reflect on her life, the mistakes and how she is going forward in a positive way to reinvent herself.

Join us for our Lunch and Learn.

Mary McCarty was a local elected official for 21 years. Her political career began in 1987 on the Delray Beach City Commission where she served one and one half terms, including a stint as vice mayor. Beginning in 1990, she served 18 years on the Palm Beach County Commission. She was selected by her fellow commissioners as Chair of that board from 1992 to 1994.

In 2000, immediately following the Bush-Gore presidential election, McCarty was elected to serve as Chair of the Palm Beach County Republican Party, a post she held until 2002.

In 2008, McCarty pleaded guilty to one count of conspiracy to commit Honest Services Fraud and was sentenced to 42 months in federal prison. She was ordered to begin immediately serving her prison term upon sentencing. A few months earlier, her husband, Kevin had pleaded guilty to misprision of a felony for failing to report his wife’s crime. He was sentenced to eight months in federal prison.

McCarty was released in March 2011.