You are here: Home / Events / Matt Valle Vice President of Development for FPL Speaks in Boca Raton on May 10th 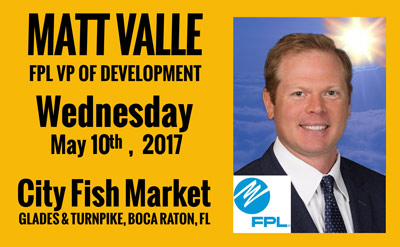 Matt Valle is the Vice President of Development at Florida Power & Light (FPL) in Juno Beach, Florida. In his role, Matt is responsible for leading the new generation development for the company across technologies including solar and natural gas.  Currently, his team is responsible for the development of 600 MW of solar in 2017 and brought online 225 MW of solar in 2016.  In addition, his team is actively developing a 1750 MW natural gas facility and deploying battery storage and small scale solar across FPL’s territory.  Prior to his current role, Matt was Vice President of Development at NextEra Energy Transmission, and was responsible for the competitive development of transmission across the U.S and Canada for the company.    He will be speaking to the Gold Coast Tiger Bay Club on May 10th, 2017 at City Fish Market in Boca Raton, FL.

Matt received his Bachelor of Science with Merit from the U.S. Naval Academy in Systems Engineering, and his Master of Business Administration from Harvard Business School.  He is married and has three children.

NextEra Energy, Inc is a leading clean energy company with 2015 revenues of approximately $17.5 billion as Dec. 31, 2015 and approximately 14,300 employees in 27 states and Canada as of year-end 2015, as well as approximately 45,000 megawatts of generating capacity.  Headquartered in Juno Beach, Florida, NextEra Energy’s principal subsidiaries are Florida Power & Light Company, which serves more than 4.8 million customer accounts in Florida and is one of the largest rate-regulated electric utilities in the United States. Through its subsidiaries, NextEra Energy generates clean, emissions-free electricity from eight commercial nuclear power units in Florida, New Hampshire, Iowa and Wisconsin.  NextEra Energy has been recognized often by third parties for its efforts in sustainability, corporate responsibility, ethics and compliance, and diversity, and has been ranked No. 1 in the electric and gas utilities industry in Fortune’s 2016 list of “World’s Most Admired Companies.”