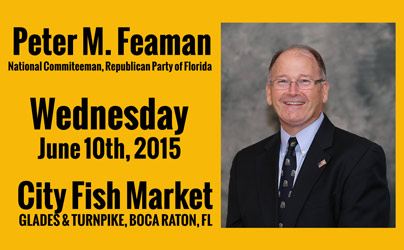 the Republican National Committee in Washington, D.C.  He currently sits on the Rules Committee

As a practicing trial attorney, Mr. Feaman was recognized by Florida Trend magazine as one of Florida’s “Elite Lawyers” in the field of business and commercial litigation in 2011.

In 2007, Mr. Feaman published his first book entitled, “WAKE UP, AMERICA!” subtitled, “Understanding Jihad for Dummies!”  His second book, “THE NEXT NIGHTMARE,” with a foreword by former Congressman Allen West, was published in February, 2012.  Mr. Feaman has appeared on Fox News and numerous radio talk shows throughout the United States to discuss the threat of radical Islam, current political issues and how political correctness will destroy America.