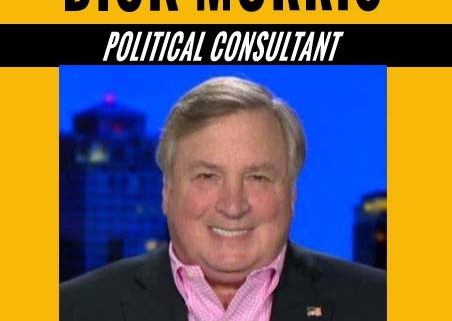 Dick Morris is one of the best known political consultants in the country.  He was Bill Clinton’s consultant for twenty years and piloted him to a re-election victory in 1996 after he had lost Congress two years before. His new book released in December, “50 Shades of Politics”, will be available for purchase as well.

In his work for Clinton, Dick helped the president move to the center and achieve bi-partisan welfare reform and a balanced budget.

He and his wife of forty-one years, attorney Eileen McGann work closely together.  She and Dick have written nineteen books, including thirteen best sellers. Their most recent book is Rogue Spooks: The Intelligence War on Donald Trump.  Before that, they wrote the best seller: Armageddon: How Trump Can Beat Hillary.

Abroad, he has advised the winning campaigns for president or prime minister in:  Mexico (twice), Argentina, Uruguay, Spain, Poland, Hungary, Moldova, Ukraine, Kenya, Japan, and Taiwan.  He also was a strategist for the UKIP, the party behind the Brexit campaign in Britain.

Domestically, he has run the successful campaigns of more than twenty Senators and Governors.

He worked for FoxNews from 1998-2012 and appeared several times each week, commenting on news and public events.

He currently tapes a daily short video on current events that he posts on his website, dickmorris.com and e mails to his 300,000 subscribers.  He also records a ten minute Facebook show Deep6thedeepstate that draws over 150,000 views per day.

Called “the most influential private citizen in America” by Time Magazine and a “gleeful genius” by Newsweek, Morris also served as Bill Clinton’s chief strategist during his years as Arkansas governor.

The Clinton-Morris relationship began in 1977 when he handled Bill’s first campaign for governor. After Clinton was elected, he fired Morris and lost his bid for re-election in 1980. Bringing Morris back, Clinton asked him to guide his successful re-election campaigns in 1982, 1984, 1986, and 1990.

After leaving the Clinton White House, Morris wrote a memoir of his work with the president, the best-seller Behind the Oval Office.  Then he wrote a series of books on politics including The New Prince: Machiavelli Updated for the 21st Century and Power Plays.  He and Eileen also wrote a prescient book in 1999, Vote.Com that predicted the Internet’s growing role in politics.

Starting in 2002, he and Eileen wrote three books, critical of the Clintons: Rewriting History (about Hillary), Because He Could (about Bill), and Condi v Hillary.

Then, starting in 2007, he and Eileen wrote a series of books critical of Obama’s policies and predicting their failure:  Outrage (that predicted the subprime crisis), Fleeced, Catastrophe (number one best seller), Revolt, 2010: Take Back America, and Power Grab.

He will be selling and signing his new book: “50 Shades of Politics” at the event.