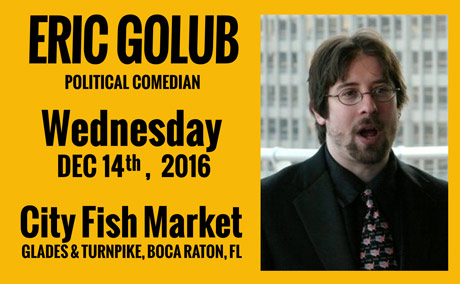 Eric Golub has spoken in all 50 states. He is Brooklyn born, Long Island raised, and has lived in Los Angeles since 1990. He received his Bachelors degree from the University of Judaism, and his MBA from USC.

He has been a stockbrokerage professional since 1994. He began writing on March 11th, 2007, the three-year anniversary of the Madrid bombings and the midpoint of 9/11. He has been inflicting his worldview on his unfortunate readers since then. He writes about politics Monday through Friday, and about football and other human interest items on weekends.

He currently has three fatwas against him: One from a Palestinian group, one from the Daily Kos, and one from the National Organization for Women. He is 100% alcohol, tobacco, drug, and liberalism free.

He has written for Andrew Breitbart’s Big Hollywood, Tucker Carlson’s Daily Caller, and World Net Daily, the Washington Times Communities, been linked to by Rush Limbaugh, Ann Coulter, Hugh Hewitt, and Mark Steyn, praised by Donald Trump, featured by the Politico, and been published in the Washington Times, Commentary Magazine, RealClearPolitics.com, Fox News Nation Online, Donna Tempo Magazine, and other publications. He has been a radio guest of Sean Hannity, Dennis Miller, Hugh Hewitt, Armstrong Williams, Lars Larson, and many others, where he discusses his desire to end Ideological Bigotry. He won the 2007 Bloggers Choice Award for Most Passionate Fan Base. Television appearances include OANN, NEWSMAXTV, ABC, NBC, CBS, FNC, CNN and more.

In his spare time he monitors college campuses and reports on Islamofascist professors. This has been published at Campus Watch, Front Page Mag, and American Thinker. He also speaks in Synagogues to show how Judaism meshes perfectly with conservatism.

He wants you to all to know that if he ever says anything that offends you in any way, you probably deserved it. After years of dating liberals, he has finally seen the light and now only dates Republican Jewish women. His family is pleased over this.