Jeff Dawson from AIPAC Speaks About The BDS Movement against Israel

You are here: Home / Events / Jeff Dawson from AIPAC Speaks About The BDS Movement against Israel

Jeff Dawson from AIPAC Speaks About The BDS Movement against Israel 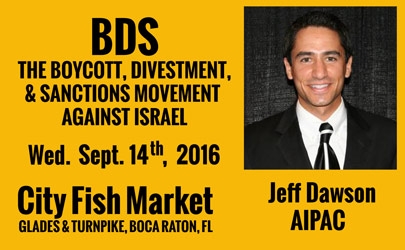 BDS: The Boycott, Divestment and Sanctions Movement against Israel – “An Overview and Approach”

Jeff Dawson received his B.S. degree in Broadcast Journalism and his B.A. degree in Political Science from the University of Florida. After college, Jeff studied Judaism and Hebrew in Jerusalem for four years. He then moved to Washington, D.C. where he worked for the American-Israeli Cooperative Enterprise (AICE) to counter the delegitimization of Israel on college campuses.

In addition to speaking at universities across North America about the Arab-Israeli conflict, he co-authored “Israel and the Campus: The Real Story” and published opinion pieces in The Jerusalem Post. Jeff then became the Hillel Director at the University of Georgia. In charge of creating and running Jewish programming on campus, he put a special emphasis on Israel advocacy. Jeff has now returned to his home state as AIPAC’s Florida Synagogue Initiative Deputy Director.