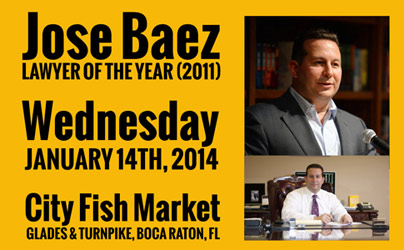 Few trial lawyers have ascended to national prominence as quickly and spectacularly as Jose Baez. Known for his passion, hard work and brilliant courtroom strategies, Jose Baez has brought a new hard hitting style of trial work to the courtroom.

Jose A. Baez is an experienced trial attorney who has represented clients in the full range of Criminal and Civil cases. While he is best known for “shocking the world” in what Time Magazine dubbed the “Social Media Trial of the Century” in the Casey Anthony murder trial for which he won an acquittal, Mr. Baez has had continued success in and out of the courtroom.

In 2011, he flew to Aruba and helped free millionaire businessman Gary Giordano from prison in the disappearance of Robyn Gardner. He was named “Lawyer of the Year for 2011” by LawyersUSA magazine and also named as one of the “Top 100 Trial Lawyers” for both 2011, 2012, and 2013 by the National Trial Lawyers Association. Mr. Baez is also well known for representing many victims of negligence and serious crimes.

In 2012 he began representing multiple victims in the “Dark Knight” shooting tragedy in Aurora Colorado. He also represented a rape victim in one of Chicago’s highest profile negligent security cases.