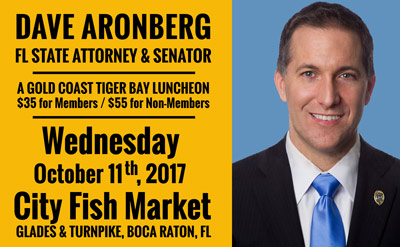 Dave Aronberg is speaking to the Gold Coast Tiger Bay Club on October 11th at City Fish Market in Boca Raton. He was elected State Attorney for the 15th Judicial Circuit in November 2012, and was re-elected without opposition in 2016. He is a former Assistant Attorney General, White House Fellow and Florida Senator.

As State Attorney, Aronberg leads a team of 120 prosecutors and 220 professional staff in five
offices throughout Palm Beach County. Aronberg’s leadership has led to a significant increase in
conviction rates for both felonies and misdemeanors, a decrease in the number of juveniles direct
filed into adult court, and a greatly improved working relationship with local, state and federal
law enforcement agencies.

Balancing the need for punishment and rehabilitation, Aronberg has expanded Palm Beach
County’s drug and veterans courts, which focus on rehabilitation rather than incarceration, and
has created innovative diversion programs for first-time DUI and domestic violence offenders.
Aronberg’s first-time DUI offender program is the only program of its kind endorsed by Mothers
Against Drunk Driving and has a success rate approaching 99%.

Dave Aronberg was born in Miami. He attended public schools before going on to graduate with
honors from Harvard College and Harvard Law School. After graduation, he worked in the
litigation department of a large South Florida law firm while also working closely with then-
Insurance Commissioner Bill Nelson to investigate European insurance companies that refused
to honor World War II-era policies sold to victims of the Holocaust.

In 2000, Aronberg was selected to be one of 15 White House Fellows from across the country. In
this non-partisan position, he served in two presidential administrations as a Special Assistant to
the Secretary of the Treasury Department for international money laundering, including the
laundering of terrorist assets.

Dave Aronberg was elected to the State Senate in 2002 as its youngest member and served until
2010. Focusing on criminal justice and consumer protection issues, Aronberg passed major
identity theft and port security legislation and received national attention for his work to close
loopholes in our sex offender laws.

In 2010, Aronberg returned to the Florida Attorney General’s Office as a Special Prosecutor for
Prescription Drug Trafficking. In his role as the Attorney General’s “Drug Czar,” Aronberg led
an anti-pill mill initiative that helped clean up the pain clinic industry and reduced the record
number of people dying each day from oxycodone abuse.

Dave Aronberg was sworn in as Palm Beach County’s State Attorney on January 8, 2013. He
lives locally with his wife, Lynn, and basset hound, Cookie.

THIS EVENT WAS ORIGINALLY SCHEDULED FOR JUNE, BUT WAS MOVED TO OCTOBER.