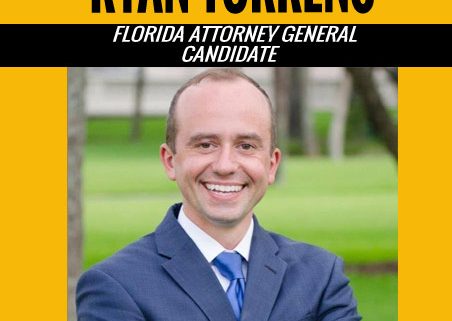 Ryan Torrens a candidate running for Florida Attorney General. He will be speaking to the Gold Coast Tiger Bay Club on June 13th at City Fish Market in Boca Raton. Tickets are available to members and the general public here. Reserve your seat now!

A fifth-generation Tampa native, Ryan Torrens owns his own law practice, which focuses on foreclosure defense and consumer protection litigation.

Prior to starting his own law practice in 2012, Ryan Torrens worked as an independent consultant on the federal government-mandated Independent Foreclosure Review Project, where he was charged with reviewing toxic mortgage loans. While working on this project, Ryan gained a serious interest in consumer protection law.

In his spare time, Ryan Torrens enjoys running, fishing, reading, and enjoying time with his family, including his partner, Francesca, and their rescued dog named Ziggy.